I decided to do a little feature on my car to display the kind of work I can do outside of meets/shows. These photos are not really edited as much as I would edit something from a show or a meet, but hopefully these photos would be able to give you an idea of what to expect if you have me shoot your car!

Anyways, here is my 1994 Toyota Camry. I originally had thought I was going to take the keys to my dad’s 1990 Toyota Supra, but he sold it shortly after I got my license. I then for some reason wanted a Mazda Miata. But just like every other teenager who just got their license and is driving a Camry, mine was handed down to me from my parents. Kind of funny to be driving the car that you grew up in. One day, I realized that barely anyone was modding Camry’s, and I thought to myself, “Hey, I wonder what it would be like to fix this up.” A few months later, I put in my order for BC Racing coilovers. If you are a Camry owner and are reading this trying to figure out what coilovers will slam your car, BC Racing will not do that job, unless you have the Extreme Drop kit. I was very disappointed with the drop on my car, being maxed out and still having a finger gap in the front. However, with my new wheel set-up, I have came to like the way my car sits.

From January up until now, I was riding on XXR 527’s (17×8.25 +35 for those who are/will wonder). I grew tired of them very quickly, and searched for something more “old school.” In August, I picked up a set of Riken Mesh wheels (16×7 +20). However, I still needed two tires before I could put them on the car. Because school was starting a few weeks after I picked up these wheels, I did not want to spend anymore money on my car until the semester was over/the new year. Funny enough, during the last week of instruction, I was searching Craigslist for tires and found a pair of Achillies ATR Sports nearly brand new for cheap. I picked them up, had them mounted them on the wheels the next week, once I finished finals, and mounted them on the car a few days after.

Here’s a photo of me with the XXR 527’s for those who wonder what it looked like. 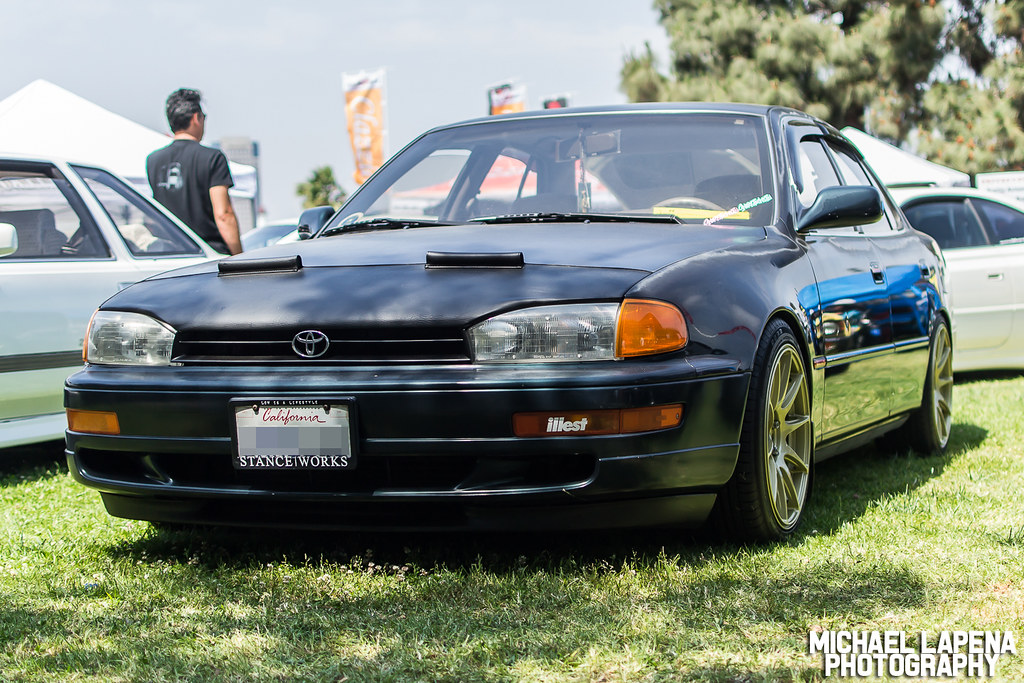 As for styling, I tried to keep it very simple. Initially, I wanted to try to do something VIP, however, like I stated above, I was disappointed after I found out how “low” these coilovers go, so I had to figure out something different. After the 2013 Toyotafest, I became very inspired by Japanese shakotan and bosozoku style.

The lip is off a second generation Ford Taurus. Corner lights were pulled from the 3.5 generation Camry. The hood bra is actually there to hide some oxidation. My parents used to have a bra on the car different than this one while I was still young, and I guess they never cleaned or took it off, which probably caused whatever is under there.

The Filipino beads. These are actually very comfortable.

I have two train handles; one to hang off the back of my car occasionally and the other to use as a handle. I initially wanted to hang the pink one off the back off my car, but then I realized it was too pretty to mess up.

These stickers were created by Abbitt Wilkerson. I’m not sure if he still makes them, but maybe you could email him about them. They are still up on his store page also.